Salmon, sea trout and wild trout are available on the River Lyne when in season on your fishing holidays here. The river can be fished using fly fishing methods, spinning or with worms. Rod hire is available from us for £20 per rod for the duration of your stay. Please check the close seasons for fishing below to see which fish are in season for your stay: 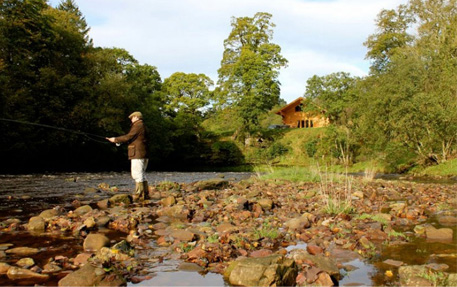 There are miles of the River Lyne you can fish from the doors step of your cabin. The river is formed near the hamlet of Stapleton by the confluence of the Black Lyne and the white Lyne moving from the north and the White Lyne (from northeast).  You can follow this map of the river.

When renting a £20 rod from us we provide the rod, line and spinner to make your fishing holidays stress free.  Bait can be bought from nearby Carlisle at Geof Wilson’s. Alternatively, you can always dig for worms on the river bed to keep the bait fresh. Fishing can also be fun for the kids, we provide nets in the cabins to help the adults reel in their fish. Please take care when walking and fishing. The river can sometimes be in flood and is very dangerous at this time. The rocks can also be slippy underfoot. The river can also be very dangerous and fast flowing.

Please contact us to discuss your holiday. We are happy to help with any queries you may have. 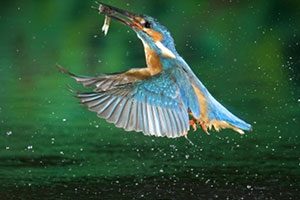 Here at our log cabins, we have many birds that visit the area and the River Lyne.

Common residents on the river are the several varieties of ducks. The main one being the popular Mallard, made easy to identify with their bright purple feather under the wing. Goosander’s are also frequently seen on the river.

A frequent visitor to the river are the small black/brown and white Dippers. Often seen walking along the rocks and under water in search of food. They mainly feed on insect larvae and freshwater shrimps so they are not a threat to fishing on the river Lyne.

The brightest yet smallest birds you will see along the river is the Kingfisher, they fly fast and low along the river & can sometimes be seen hunting fish from riverside perches… they are a joy to watch!

The Heron also populates the river, although sometimes not a welcome site for the fishermen as their diet is mainly small fish.

During your stay you are most likely to see a Buzzard flying high in the sky or resting on a nearby fence post, they are becoming common in the Lake District area. It is said their plaintive mewing can be mistaken for a cat. A familiar site is a smaller bird of prey the Kestrel. Made easy to identify with their pointed wings & long tail then can often be seen hovering by the roadside.

If you are in your hot tub on an evening you may be lucky enough to see or hear the local Tawny Owl. The Tawny Owl are mainly residents with established pairs never leaving their territories. 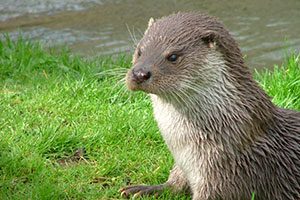 There are many species of wildlife to see on your fishing holidays here with us. You may be lucky enough during your stay to see the playful otters go about their day hunting for fish in the river… not always a welcomed site for a keen fisherman! Otters are well suited to life on the water with their webbed feet & dense fur to keep them warm.

When enjoying your river walk you are likely to come across some of the local Roe Deer who enjoy the habitat of our local woodland. Roe Deer are small & elegant with a summer coat of reddish brown, turning to grey, pale brown or sometimes black in winter. They do prefer woodland & forests but may be seen in open fields when populations are high.

We welcome your pets

Bring along your pets for FREE to our dog friendly holidays and let them enjoy the sites and smells of the forest and riverside walks that we have to offer.

A unique opportunity for guests to take flights from Carlisle Airport their own private Gyroplane. The flights will take you on a wonderful journey around the lakes and you will be able to see the breathtaking views and scenery the Lake District has to offer.

Flights are £120/hour and 2 planes are able to fly at the same time with adjoining radios.

FIND OUT MORE
EXPLORE THE WILD